Leo Horbach created the Oscar for the DMFF

In the video of the 2020 DMFF Awards presentation you can see on their faces just how excited the award-winning film makers are about the trophies they have received. These beautiful awards were created by sculptor and DMFF team member Leo Horbach. His passion for the hills is inextricably tied to the substance from which the mountains are made: the roughness of rock, the hardness of gneiss and granite, the beauty of marble and the purity of quartz.

Leo, what inspired you to take up sculpting? Was it a passion for art or rather for the material you work with?

Since my childhood I’ve always had a creative urge. When we would play as kids, I was fascinated by building sandcastles, damming streams, constructing huts, fashioning things out of branches and modelling all sorts of creations from natural materials. I was always doing something. Later in life I went to art school in Maastricht. Ever since I qualified, I’ve worked with all kinds of materials and disciplines. My passion for stone came about in around 2000.

What’s so special about the material? Why not work with wood or another natural material instead?

Stone is obstinate, hard, it embodies power and energy.
Stone inspires. I like the confrontation. A boulder provides inspiration, a block a challenge. Other materials have that too, but to a lesser degree.
I always use the direct carving technique with stone, without a design or model. That means I allow the shape to develop out of the stone. I get out of it what I find. 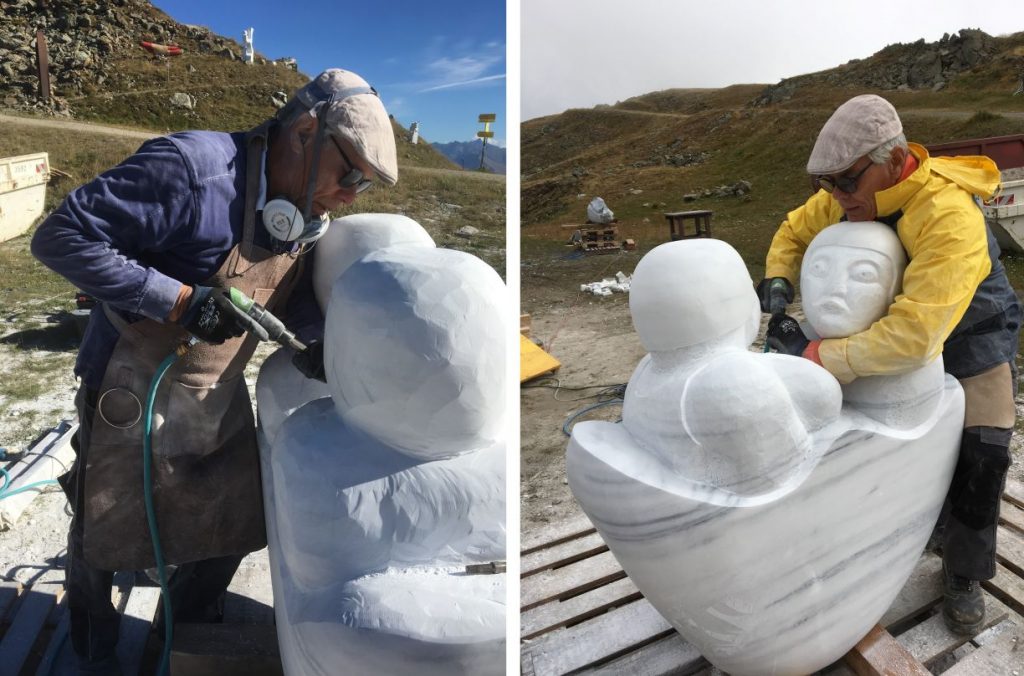 Do your hands start to itch when you are walking in the mountains and you come across a nice piece of rock?

In the past I often used to bring rocks back with me from the mountains. Sometimes, I would start building a cairn along the way. In German these are called Steinmänner [sing. Steinmann, literally ‘stone man’, in Dutch steenman]. These past few years, I’ve been taking lots of pictures of rocks when I’m out walking: their surfaces, pictures of walls etc. I find their textures, colours, cracks, fissures and hollows have an inspirational effect on me. I have developed a technique for processing these photographs digitally. Using my computer I create a so-called “iGraphics”. I call it digital sculpting. It throws up some surprising, surrealistic  narratives. The final results I categorise as “It’s all about fantasy”. 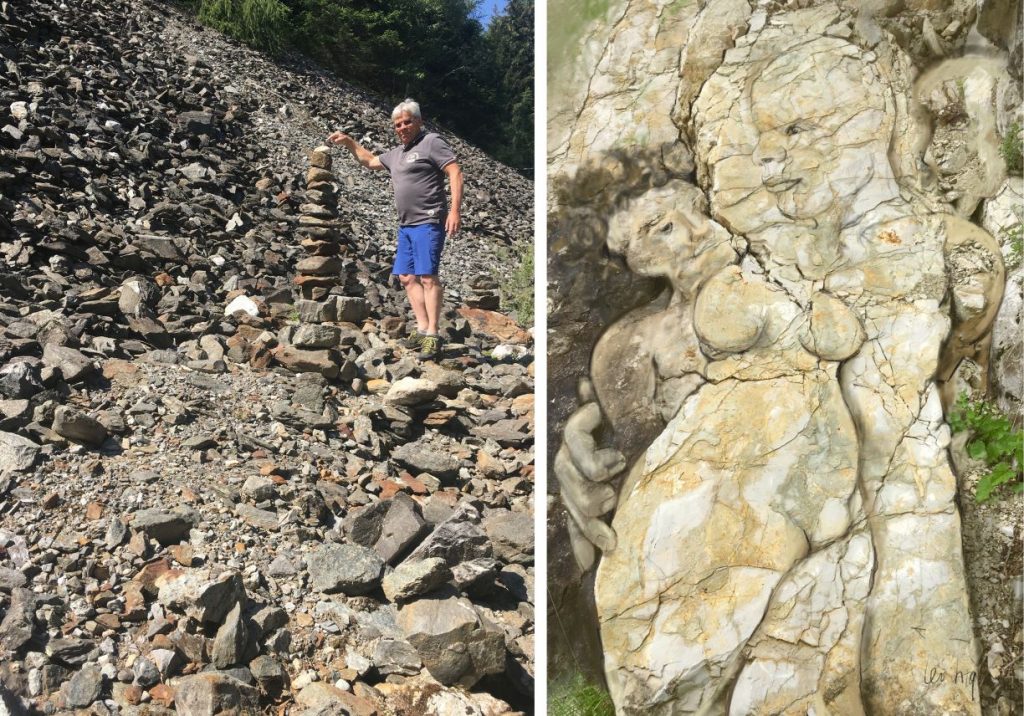 Leo Horbach with a steenman (left) and digital sculpting (right)

What is a Steinmann? Do they have a special function?

The DMFF Award is a Steinmann. A Steinmann is a heap of stones – or cairn – which has been piled up in bleak and difficult terrain, for example, in the mountains. The Steinmann is a kind of waymark, or beacon. The cairn sometimes indicates a direction. Sometimes they appear spontaneously, at other times on purpose. It is almost ritualistic.

The Steinmann is an impromptu heap of stones built randomly, with no apparent structure. When building it up it has to overcome gravity and maintain a balance.
I chose to create an award in the shape of a Steinmann as a symbol for waymarking but also trailblazing. A marker signalling the highest point or passage. Through their work, the camera operators and film makers who have contributed to the DMFF, have also shown the way, have blazed a trail and marked a high point in achievement! The Steinmann awards are made from pebbles of Carrara or Laaser marble on a base of Belgian granite. The stones are coarse, the “head” is randomly sculpted and polished.  The awards are the reward for a brilliant, groundbreaking and pioneering performance in the field of mountain cinematography. 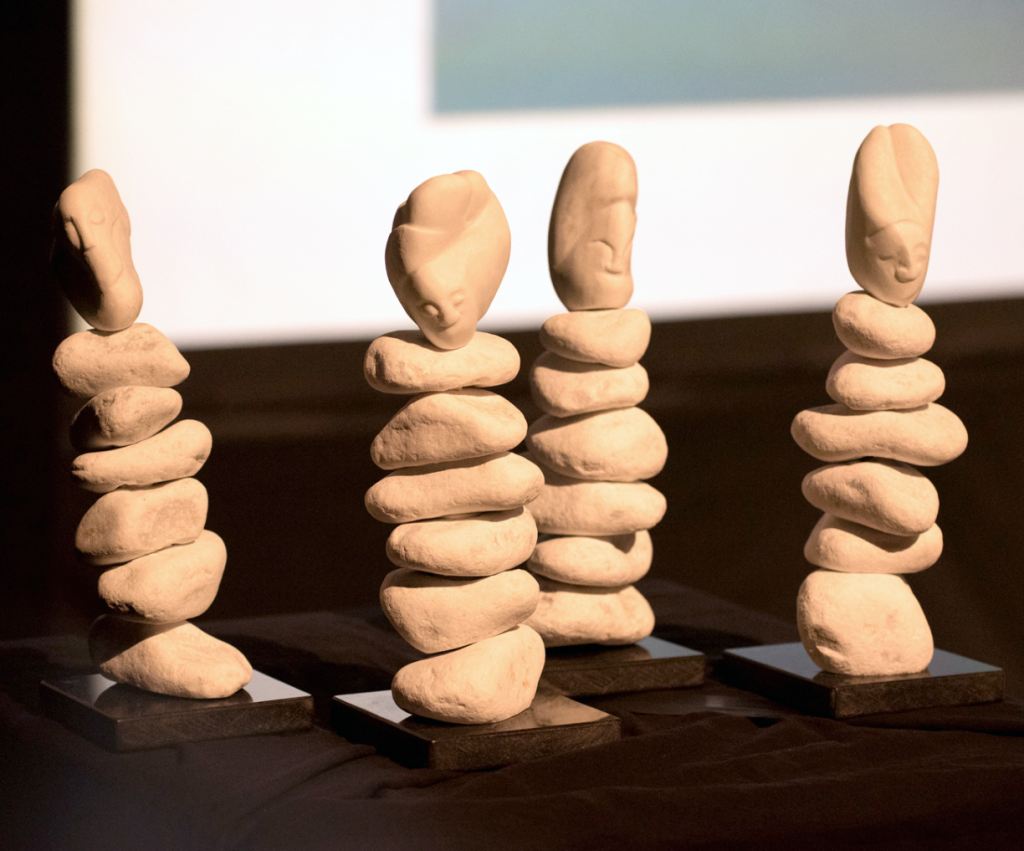 Do the stones for the DMFF awards come from a special place? For example, do you pick them up when you go for a walk?

I prefer to use marble. For me it’s a noble material. The white marble is from either Carrara (Tuscany) or Laas (South Tyrol). You can find pebbles of marble in the mountain streams near to the quarries.

Final question: how can we make our own Steinmann?

Just do it, you simply need a good sense of balance, an appreciation of gravity, a dose of patience and … a bit of luck.