With its rolling uplands and steep-sided valleys, Zuid-Limburg – the backdrop for the Dutch Mountain Film Festival – defies all the preconceptions that most of us have about the Netherlands. This is where the mountains begin …
The Alps has their four-thousanders and Scotland its Munroes. And now, Zuid-Limburg has its very own bucketlist of ‘must-climb’ summits too.

The Seven Summits of Zuid-Limburg may not have the noble elevation of a Mont Blanc or a Kilimanjaro, but in their own distinct way, we believe our peaks have something to offer lovers of the Great Outdoors, as well as some fantastic vistas of our magnificent countryside. We hereby challenge you to scale the Seven Summits! Send us your photos or post them on Facebook or Instagram.

The top of Schneeberg is in Germany, its name (‘snow mountain’) being derived from the whitish colour of the chalk soils. The starting point for the route is in the Dutch village of Oud-Lemiers.

Not only did German tanks roll down these slopes here to invade the Netherlands in May 1940, its strategic location meant that they could dig in here on their retreat from advancing Allied forces 4 years later. The dragon’s teeth of the Siegfried Line can still be seen here today. From near the top you can clearly see Aachen and Lousberg to the south-east and the Eifel beyond. In the north-east is Wilhelminaberg with its indoor ski slope and on the horizon you can see the lignite-fuelled power plant in the east. In clear weather you can see the town of Sittard in the north. 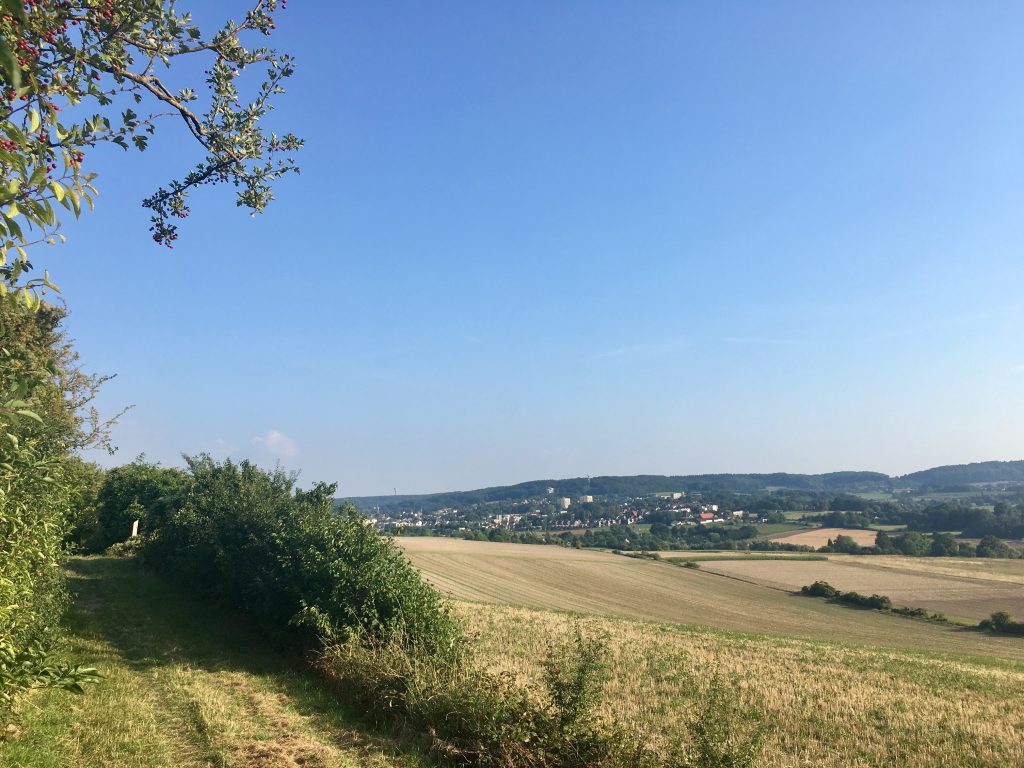 Summer on the flanks of the Schneeberg 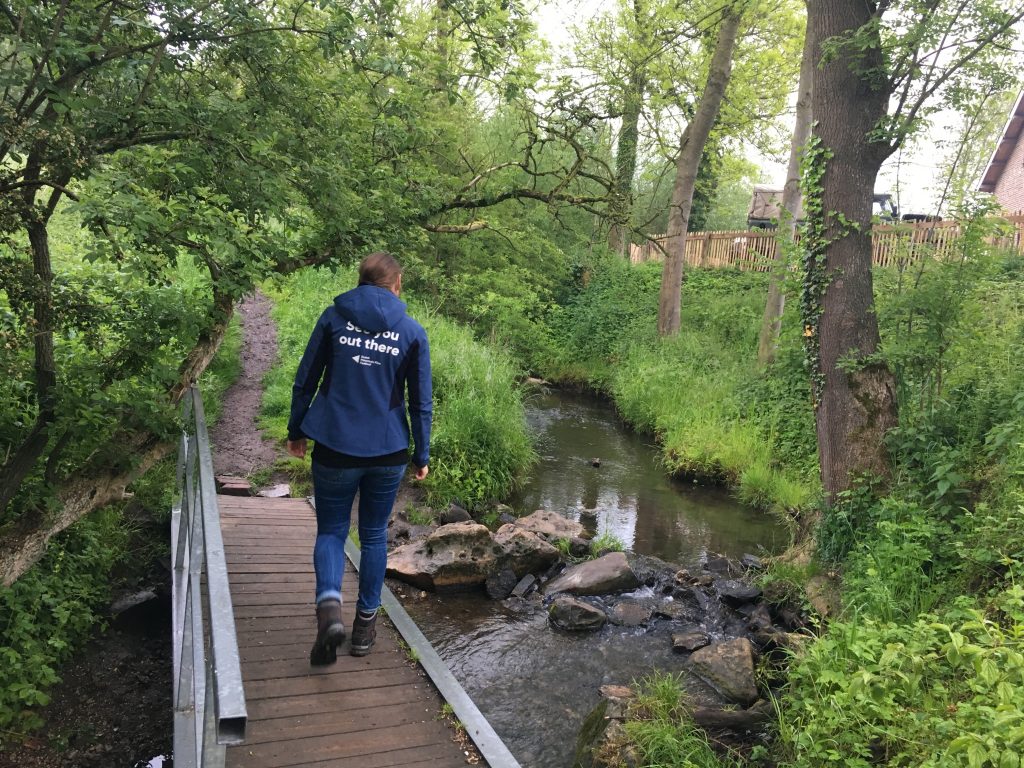 Height profile of the Schneeberg route

Wilhelminaberg is an artificial hill which was transformed in the late 1970s from a coal slag heap into a recreational area. The hill has an elevation of 225m.

The 360-degree panorama extends as far as the slag heaps of Genk in the north-west, 40 kilometres away, and the Eifel and the Ardennes massifs in the south.
The starting point is the Strijthagermolen. Be aware that you might have to share some of the route with mountain-bikers! Part of the route includes the highest stairway in the Netherlands. 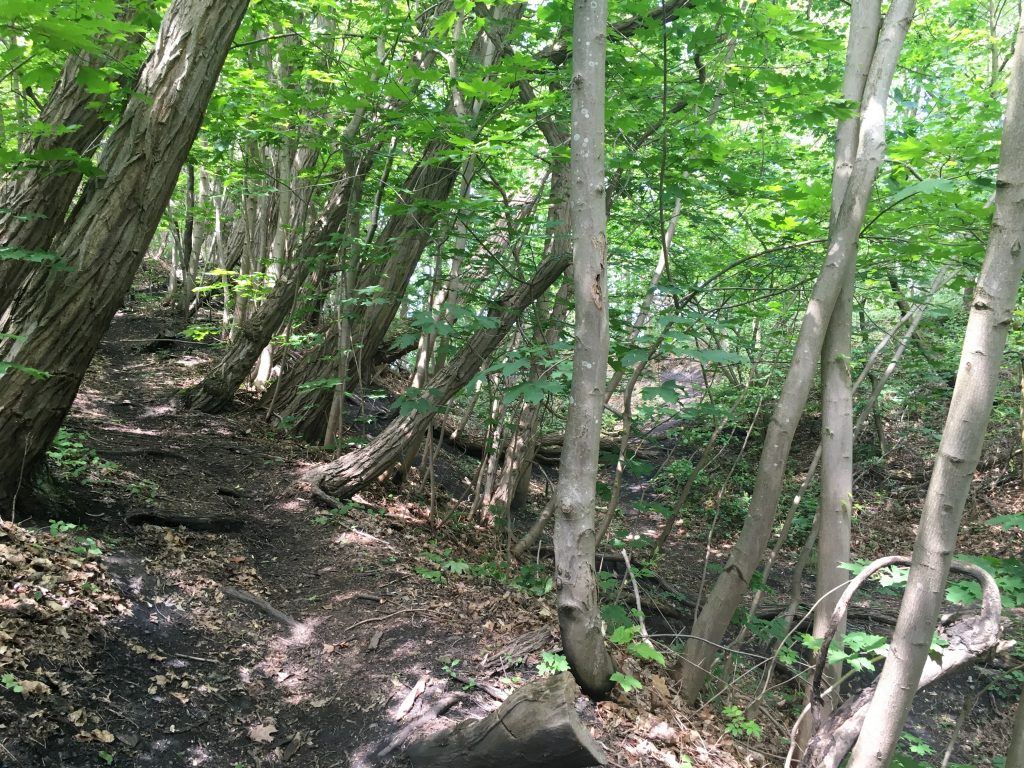 The south face of Wilhelminaberg

Height profile of the Wilhelminaberg route

Cyclists speak about Eyserbos, the steepest climb in the Netherlands, with a healthy respect. The views as you emerge out of the meadows above Piepert are truly breathtaking, rewarding walkers a real sense of achievement.

It was the scene of fierce fighting towards the end of the Second World War. Held by the Germans for four days, the hilltop was eventually claimed by the advancing Americans. The hilltop radar station which the American installed here to coordinate their war efforts was eventually replaced by a transmission mast.

Once at the top, see if you can spot the Netherland’s highest windmill at Vrouwenheide (216 m), a hillock on which stands a triangulation point making the base station for the Dutch coal mines. Because the view south takes in the Eifel, which lies beyond the Vaalserberg (327m), it was once thought that this was the highest point in the Netherlands. 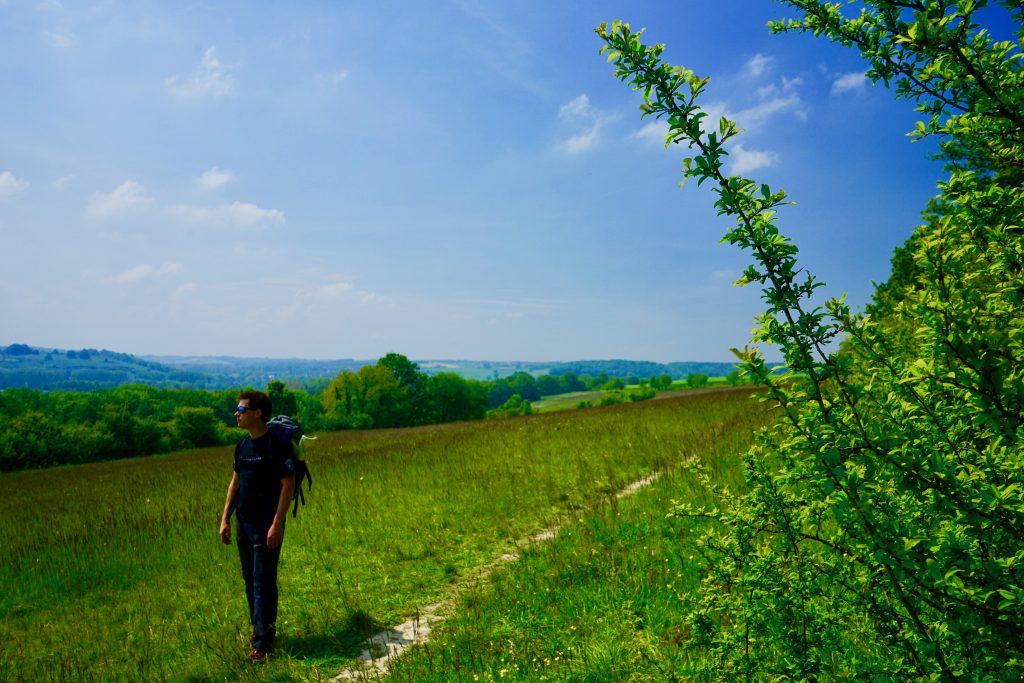 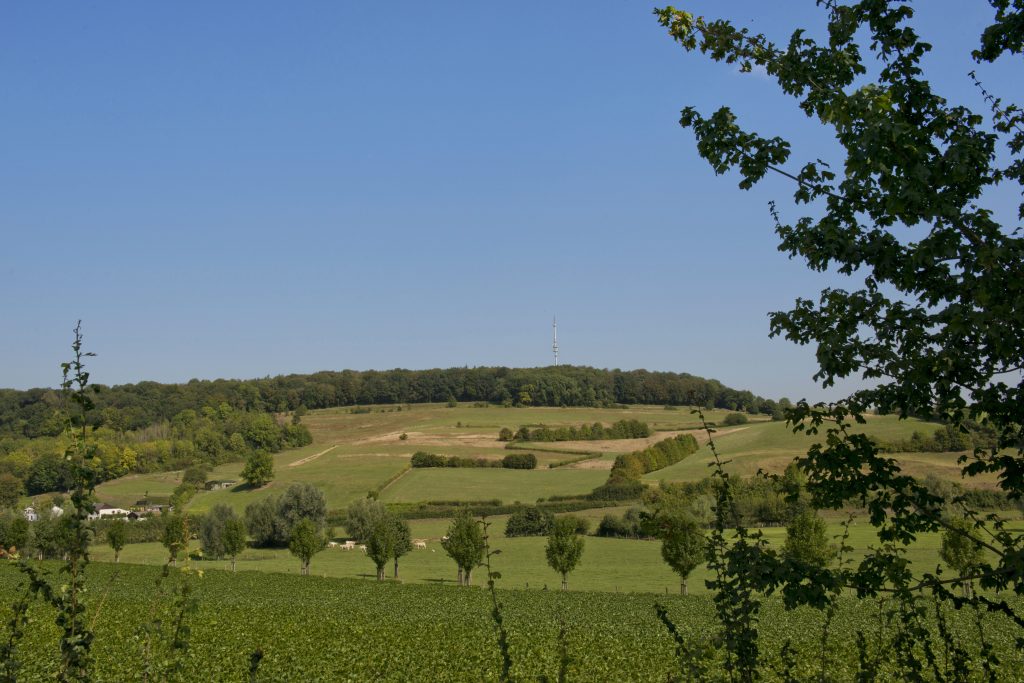 Profile of the Eyserbos route

The statue of the Virgin Mary at the top of Gulperberg dates from 1935. The hill is a northern outlier of the Crapoel Plateau.

During the Amstel Gold Race, one of cycling’s so-called Spring Classics, riders struggle up its flanks.   The statue looks out across the Geul Valley to the point where it is joined by its tributary the Gulp. The walk takes in the Dunnenbosch, one of the many delightful wooded slopes in this part of the country. The poplars in the distance might be mistaken for Tuscan cypress trees. In the east you can see the transmission mast atop the Eyserbos and to the south the highest point in the Netherlands, the Vaalserberg. 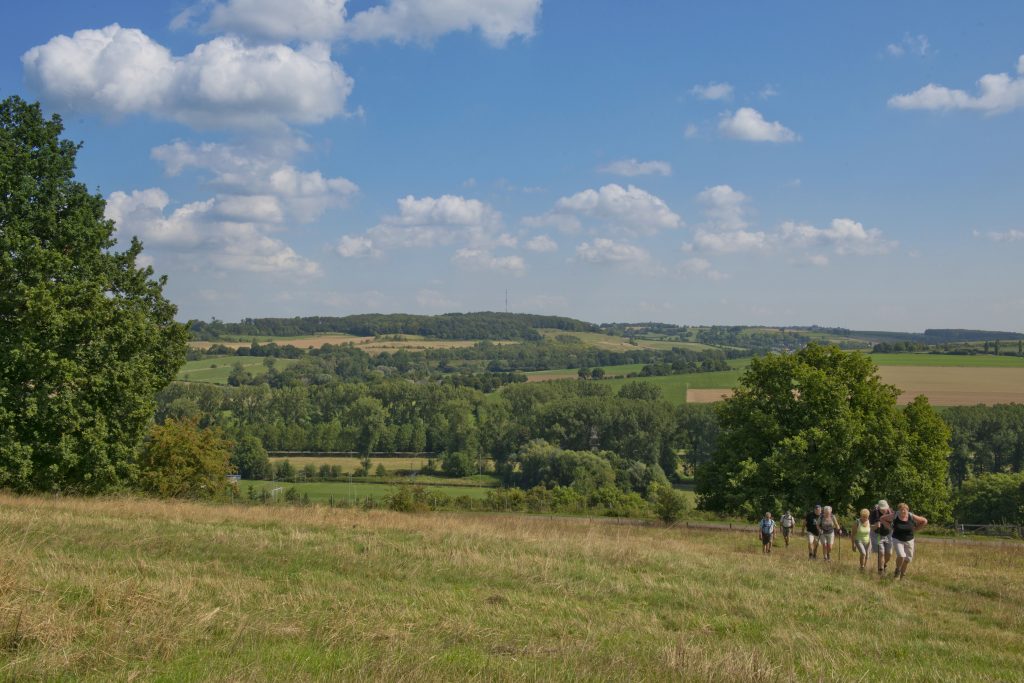 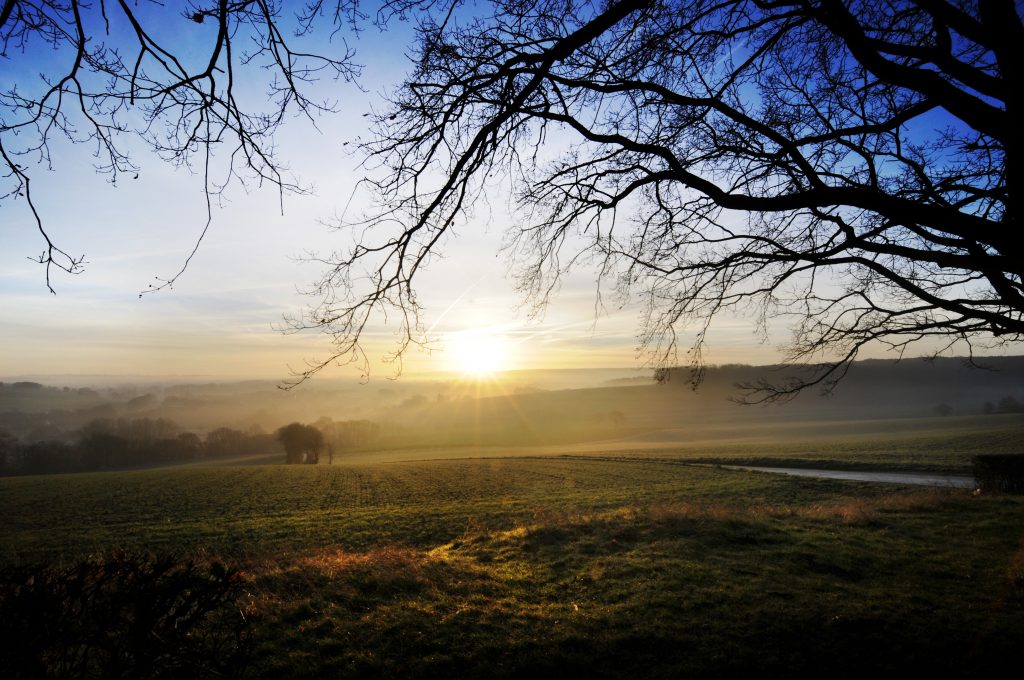 Profile of the climb of the Gulperberg from two sides

Close to the southernmost point in the country is the Bovenste Bos, where rocks of the Upper Carboniferous period reach the surface, and which also provides a habitat for the alpine newt.

At its highest point, the borders of the Netherlands, Wallonia and Flanders meet here. Along the Belgian side of the border, near Kasteel Beusdael, ran the infamous Wire of Death during the First World War, an electrified fence with a current of 2,000 volts. Once you emerge from the woods on top of the hill, you’ll be richly rewarded with some magnificent panoramas. The half-timbered houses in the valley make the ‘mountain experience’ complete. The name Hakkenberg comes from the timber that was ‘hacked’ for timber here. 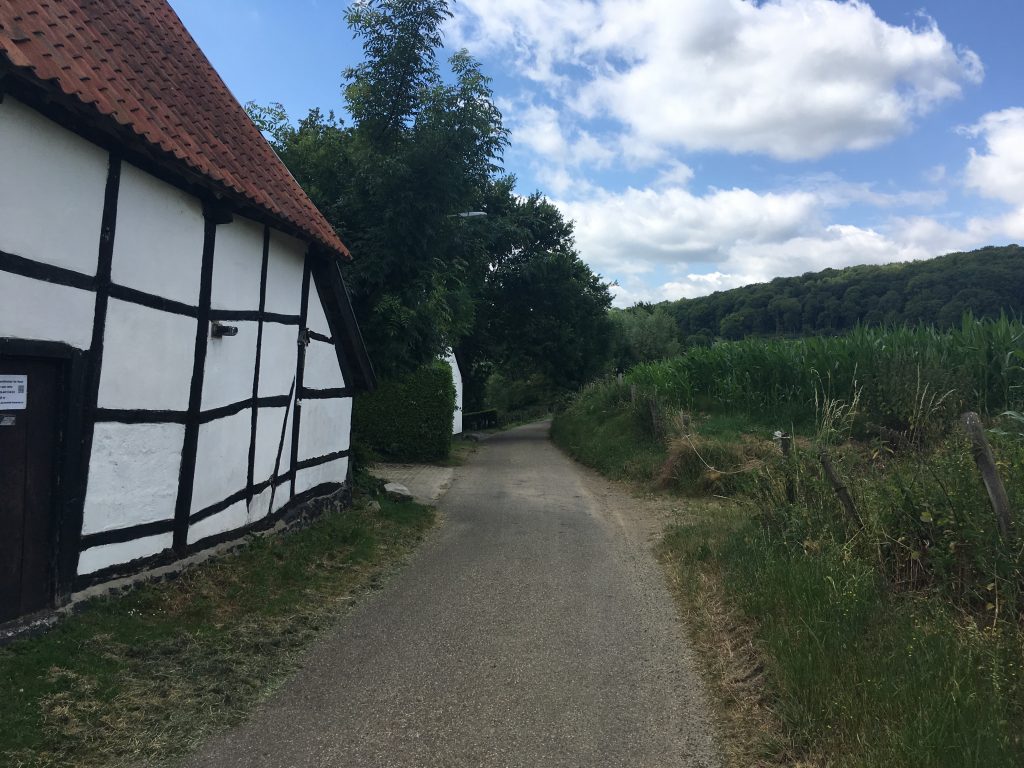 You could be forgiven for thinking this was a real mountain village. 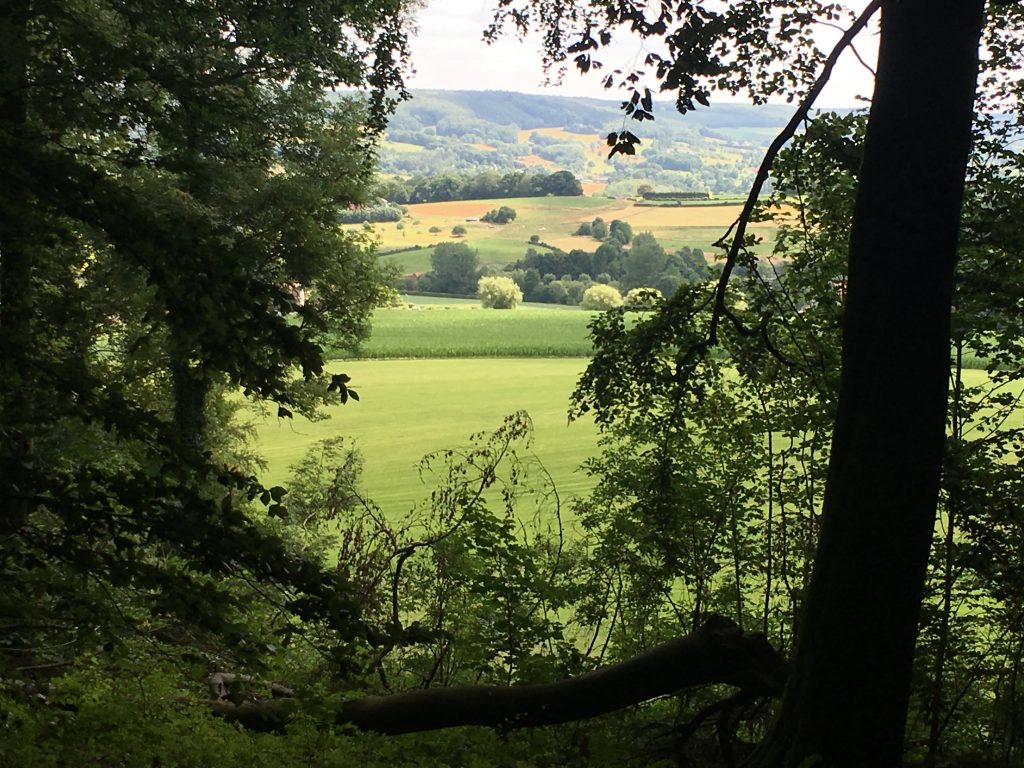 Profile of the route to the Hakkenberg or Bovenste Bos

The St Brigid Pine next to the church provides a good landmark, since the village of Noorbeek is well concealed in a hollow. In 1634, the residents erected a Pine tree each year in veneration of St Brigid. This would help rid Noorbeek and its environs of the cattle disease that had plagued the district. The disease disappeared and the cattle were spared. Ever since they have remained loyal to their pledge.

For many centuries Noorbeek formed part of the County of Dalhem, which was governed from ’s Gravenvoeren on the other side of the hill, now in Belgium. The river Noor which rises here flows southwards from here into the river Voer. The direct route to ’s Gravenvoeren runs over Kattenroth, a ridge which now forms the border between the two countries. Why not start the climb to the top from Norbeek and descend the slopes to the south? 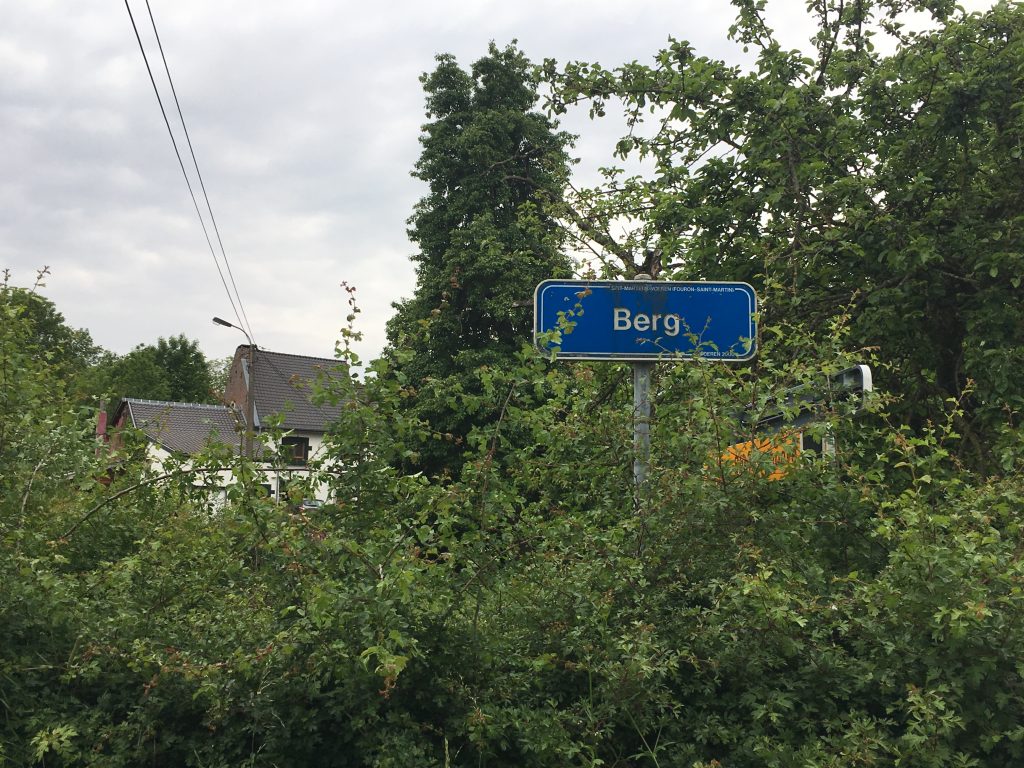 Height profile of the route from Noorbeek to ‘s Gravenvoeren.

The westernmost peak of the Seven Summits, like its easternmost counterpart, was not formed naturally, but was man made. Whilst the Wilhelminaberg near Landgraaf is black from coal, d’n Observant near Maastricht is white from marlstone quarrying. On one side is the River Meuse/Maas and on the other the Albert Canal which marks the border between the Netherlands and Belgium.

D’n Observant forms part of the larger Sint Pietersberg and was made from the marlstone rubble that was brought here from the ENCI quarry. The quarry is now a nature reserve and is home to the eagle owl and local Mergelland sheep. The complex is like a swiss-cheese peppered as it is by 150 kilometres of underground galleries where marlstone was hewn. They are now a favoured hibernation spot for bats. The top of d’n Observant is relatively easy to reach by the normal route. For the more adventurous try the route via the Verborgen Vallei (‘Hidden Valley’). Take care! The marlstone is crumbly, and the slopes and trails deceptively steep. 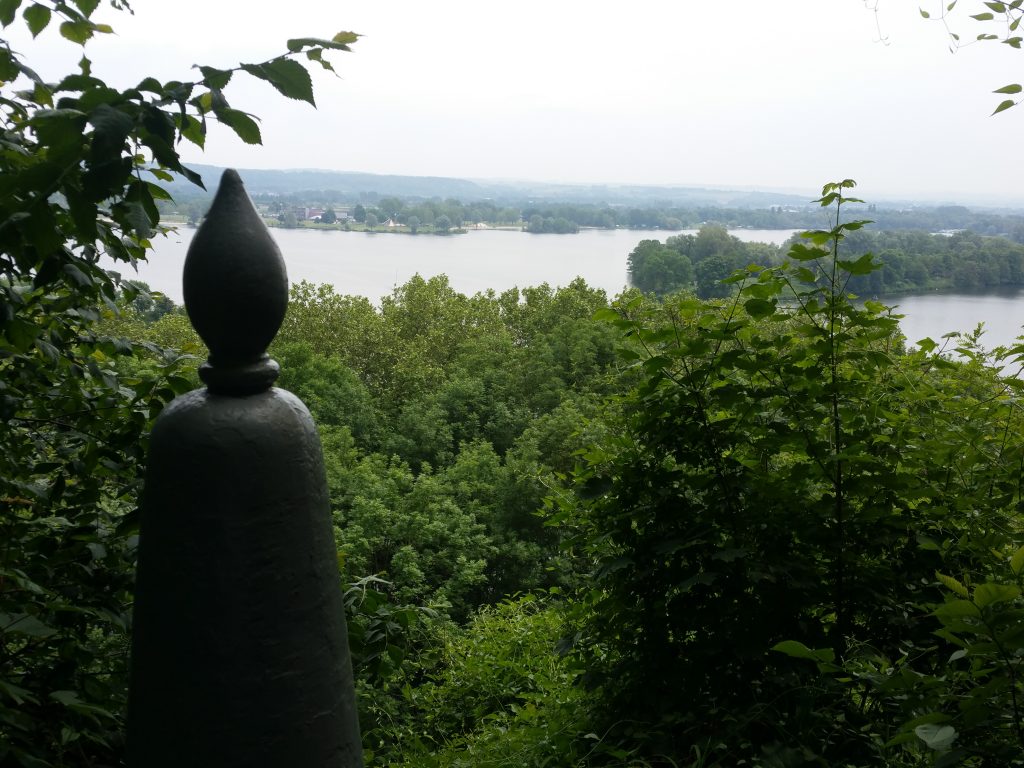 Where the River Meuse enters the Netherlands 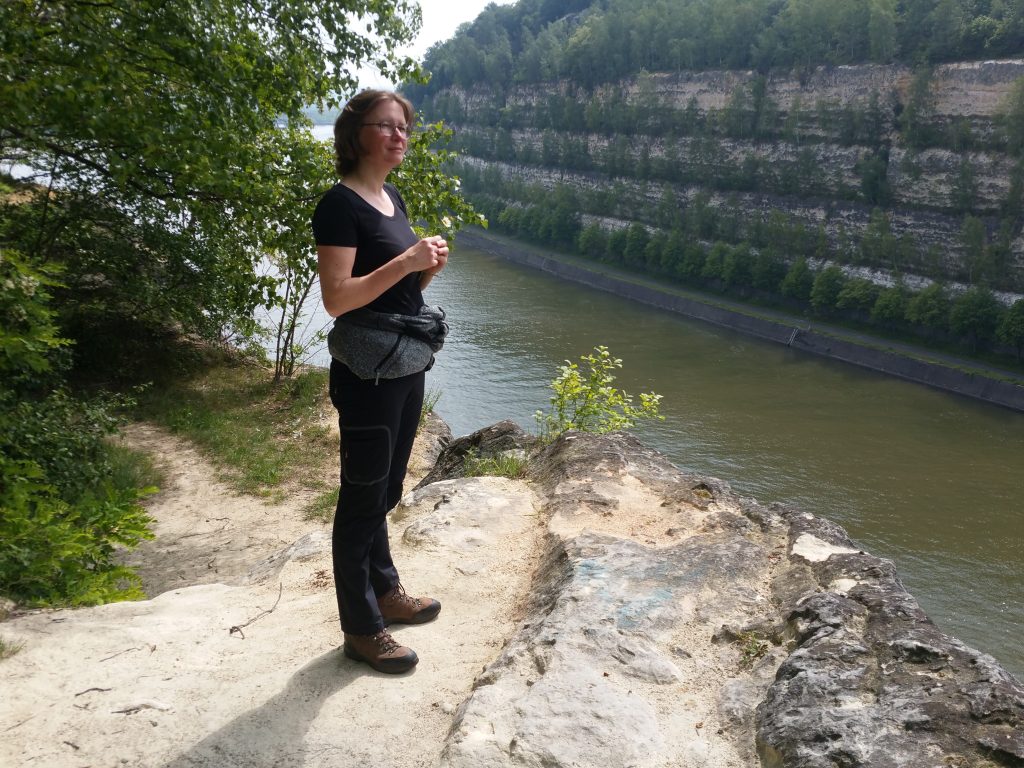 The profile of the route via the Verborgen Vallei.