One way of conquering the unknown is to map it. Andrew Davies, an avid devotee of the DMFF for many a year, has held a lifelong fascination for maps, in particular, mountain cartography. In collaboration with De Vondst, IBA Parkstad and the Museo della Montagna in Turin, he has put together an exhibition which looks back at the development of mountain cartography from its early beginnings. Through the medium of historical and contemporary maps, this exhibition tells its story from its infancy in the 17th century, but also with reference to historical mapping in the Euregion.

Mountaineering would not have been possible had it not been for mapmakers. The earliest mountaineers were in fact the unsung military surveyors who slogged their way to almost insurmountable summits in all weathers, carrying heavy measuring equipment, so that the land could be accurately mapped. The exhibition traces the development of mapping from the Cassini Carte générale de la France, Henri Dufour’s first detailed map of Switzerland to the mapping of the very highest mountains, when Sir George Everest carried out the Great Trigonometrical Survey of India.  Later, the Alpine Clubs took it upon themselves to produce specialised maps, often making use of innovative new methods along the way. 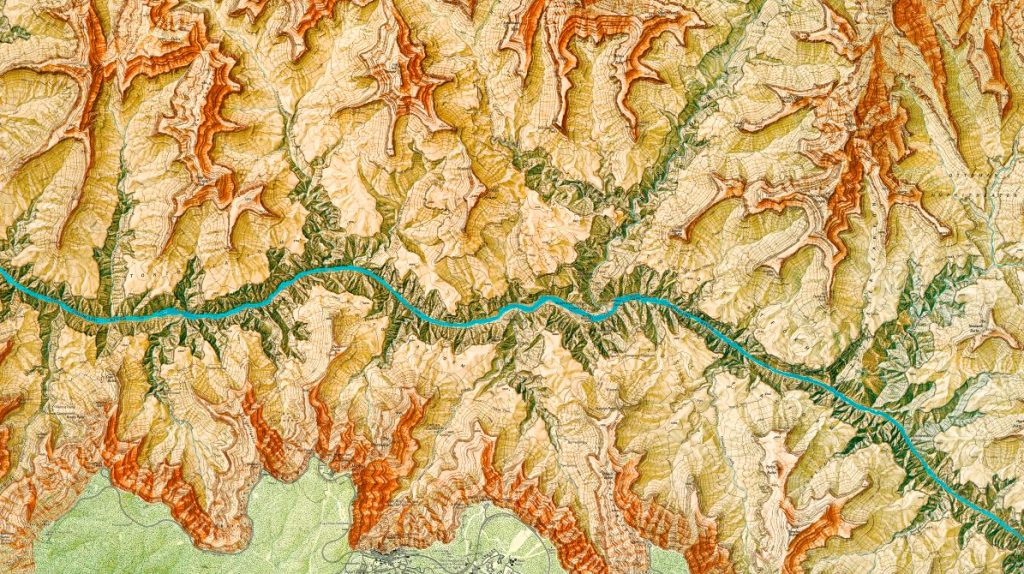 Our region too has a rich cartographic past. The maps of Jean Joseph Tranchot, working from Aachen, provide us with an intriguing insight into Napoleon’s newly acquired possessions west of the Rhine – including Limburg – in the pre-industrial age.

Cartography is likewise an aid to the policymakers of today. IBA Parkstad will be showing how maps are still being used to plot the future development of Parkstad. Chronologically, for example: what did the urban infrastructure look like in 1924? Or mentally: what are the places that have made an indelible mark on our memories? Or thematically: where is the countryside at its most beautiful? Where are the borders and what’s under the ground? All this is with the aim of bringing about greater insights into our surroundings.

The fact that the exhibition takes place in De Vondst is no accident: Limburg’s very own centre of archaeology is located on an important Roman crossroads. The Peutinger map is also on display: this is a copy of a Roman map of Eurasia dating from the 3rd or 4th century. The map covers an area that stretches from the River Ganges in India to the British Isles. But Corivallum too (Heerlen) is marked on the map.

The film The Map against the World, directed by Kang Woo-Suk, is all about mountain cartography. This 2016 cinematic production from South Korea tells the tale of an epic drama to map the country by Kim Jeong-Ho, the creator of “The Great Map of the East Land”. A copy of the map, the most important in South Korean history, is also on display in the exhibition.