During the Awards Show at the 11th Dutch Mountain Film Festival on 5 November 2021, the winners of the five DMFF Awards were announced: 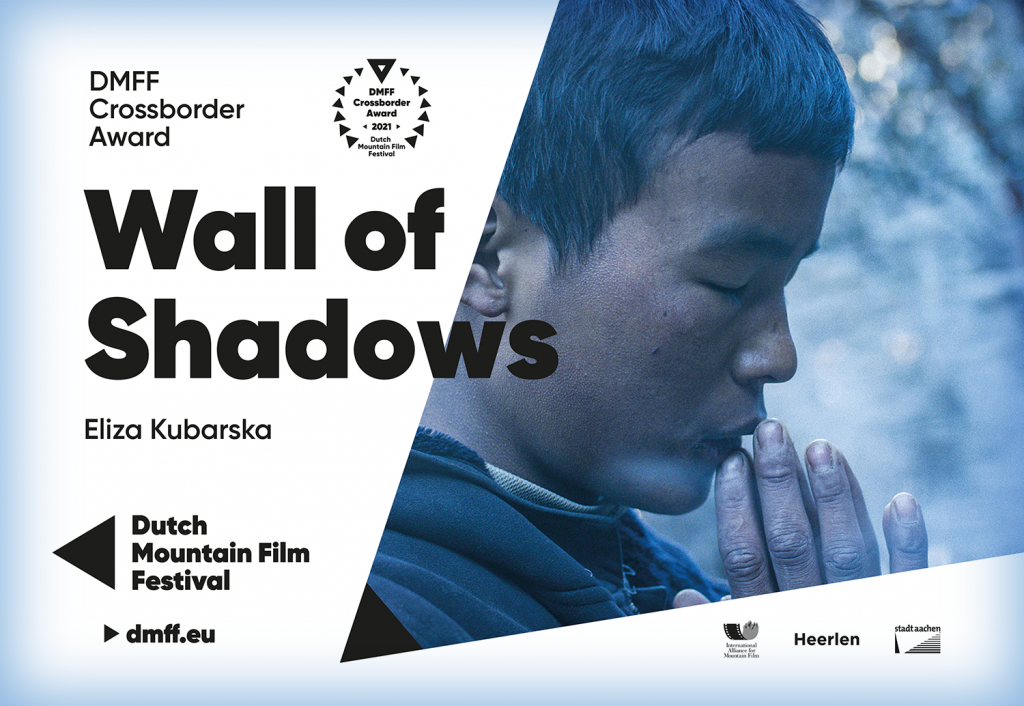 ‘I told you, this film is not about climbing’, says one of the climbers in this movie, ‘it is about people’, and he is right, and not right at the same time. This film is about the people that live the mountains, not only that climb them. It is a powerful, stunning portrait of a Sherpa family, who work in the climbing business, trying to make money so their children can escape the harshness of life in the Himalayas. But it is far more than that. The filming is magnificent, set in bleak and icy grey-blue colours, the camera clinging to the characters and the story, the scenario outstanding and the dialogue fierce. This film is made by mountain people. We are witnessing the worries and anxieties of a family as if we are there with them, from a Sherpa point of view, helping us to understand their fate. What’s more, ‘Wall of Shadows’ singles itself out on account of its beautiful music which reflects the coolness and splendour of the icy landscape.

‘I don’t want my son to climb’, ‘What choice do we have?’, ‘There is a God, but we have to make ends meet’, ‘If you don’t climb I cannot pay you’- simple sentences that paint a difficult world, in which the Sherpa still sharpens the crampons of the climber. The stars in this documentary/feature film are world-class: Ngada Sherpa, Jomdoe Sherpa, Dawa Tenzing Sherpa (nine-time Everest summiter!) are completely at home in front of the camera. Filmmaker Eliza Kubarska manages to introduce the viewer to the explorers’ problems related to competition and humility towards nature, as they try to climb Kumbhakarna, the holiest of mountains which no one is supposed to climb at all. This film leaves the viewer willing to reflect on the limits of human understanding of the world, and of oneself.

The DMFF Crossborder Award is sponsored by the the cities of Heerlen and Aachen. 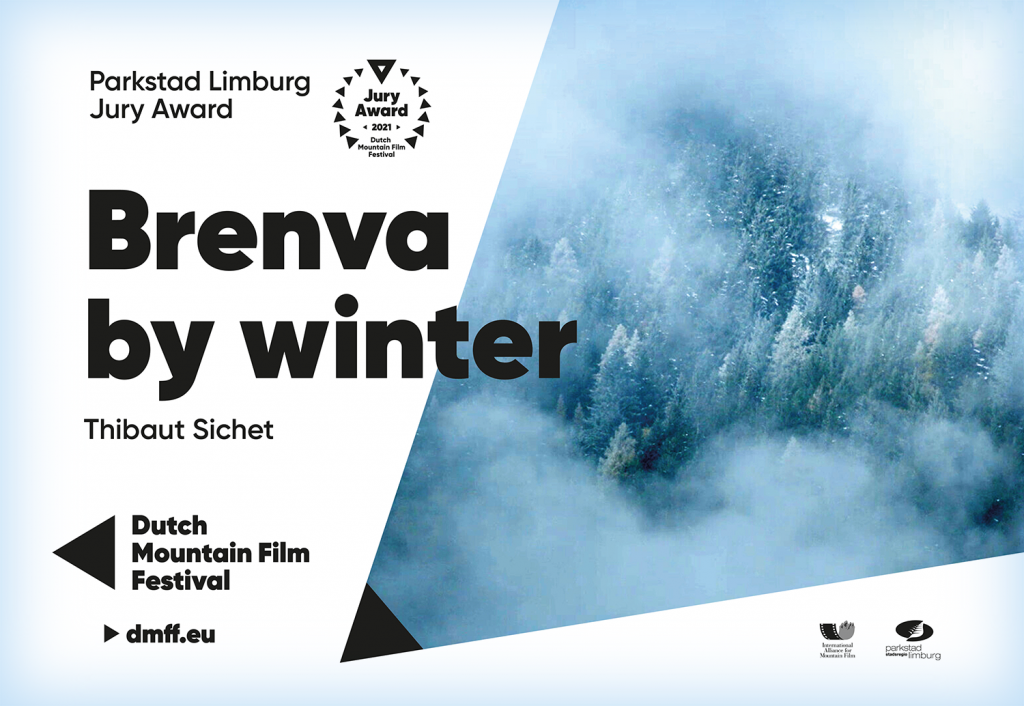 The jury had to watch this one twice – a stunning yet true historical account that comes to life again in a world where every mountain has already been climbed.  Thibaut Sichet takes us back 63 years, using filming techniques of the old days, mingling historical footage with new images. The story of Vincendon and Henry, two friends that climb the Brenva Spur on the Mont Blanc in winter, is revived in this way, reminding us that there was a time when adventure was real, relentless and cold, but that the reasons for going out in the mountains are still the same. The director addresses the two boys with his own feelings towards the mountains, asks them questions and wonders if they had any hope of surviving, after seeing a rescue helicopter up in the air. All in all, this film stands out with its masterful use of archival materials, combined with new footage, which builds up an image of seriousness and horror, but also makes it easier to understand the big question in mountaineering: why? 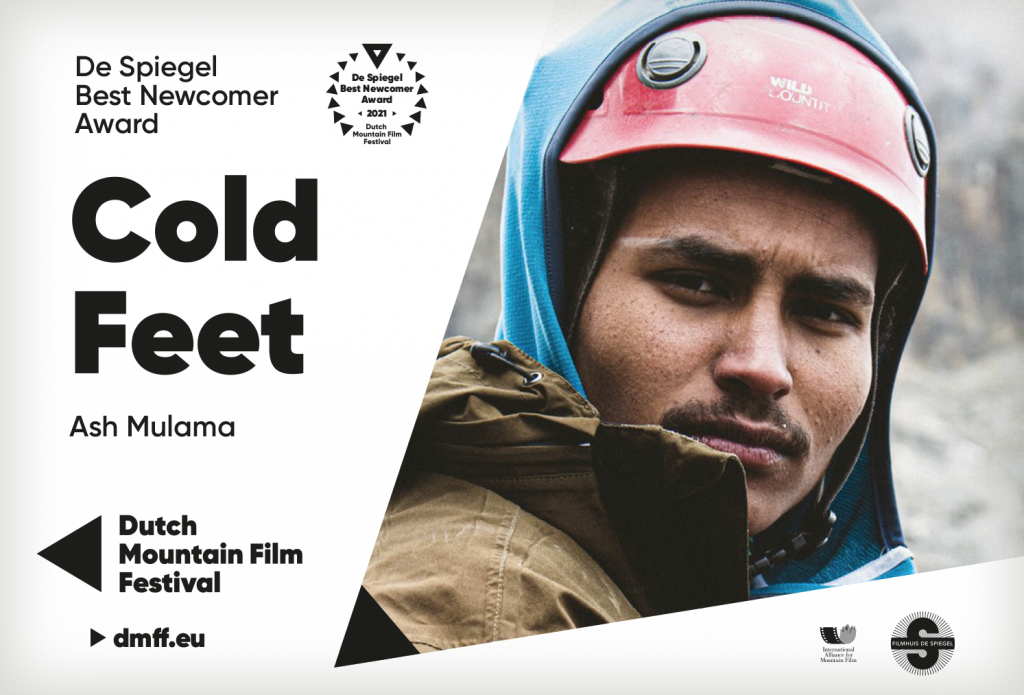 Since ‘Free Solo’, everybody has known what free soloing is, climbing without a rope – but what about doing it in bare feet – wouldn’t that be the next big thing? This uplifting, fresh, energetic and young documentary is about the dreams of a young guy from Kenia, who trains hard in the gym to become a good climber, but knows that ‘good’ is not good enough: you need to stand out in the crowd, and fully embrace the danger of these sports.  So the title, ‘Cold Feet’, is to be taken seriously. Filmmaker Ash Mulama follows climber Peter Naituli closely, as a friend, as he tries to scale Mount Kenya barefooted, as he works his feet with sand paper and tells himself that this is the only way to really make a connection with the mountain. The enormous effort presented in reaching the top, and the way it is filmed, makes this documentary stand out. But we also see a father, puzzled by his son who doesn’t want to become a businessman, but instead becomes a mountain guide at the tender age of seventeen – other guides think he is popular with clients because he is mixed race. The music, sound and imagery, unlike ‘Free Solo’, come across as being slightly home-made, but the story and the energy it brings is powerful enough to win a Newcomer Award. And there is something that so many other films on mountains and climbers lack: humour and human understanding. We see Peter’s grandma who starts singing, and at the filmmaker/cameraman who celebrates his friendship with Peter. Let’s hope that this film will be the start of two brilliant careers. 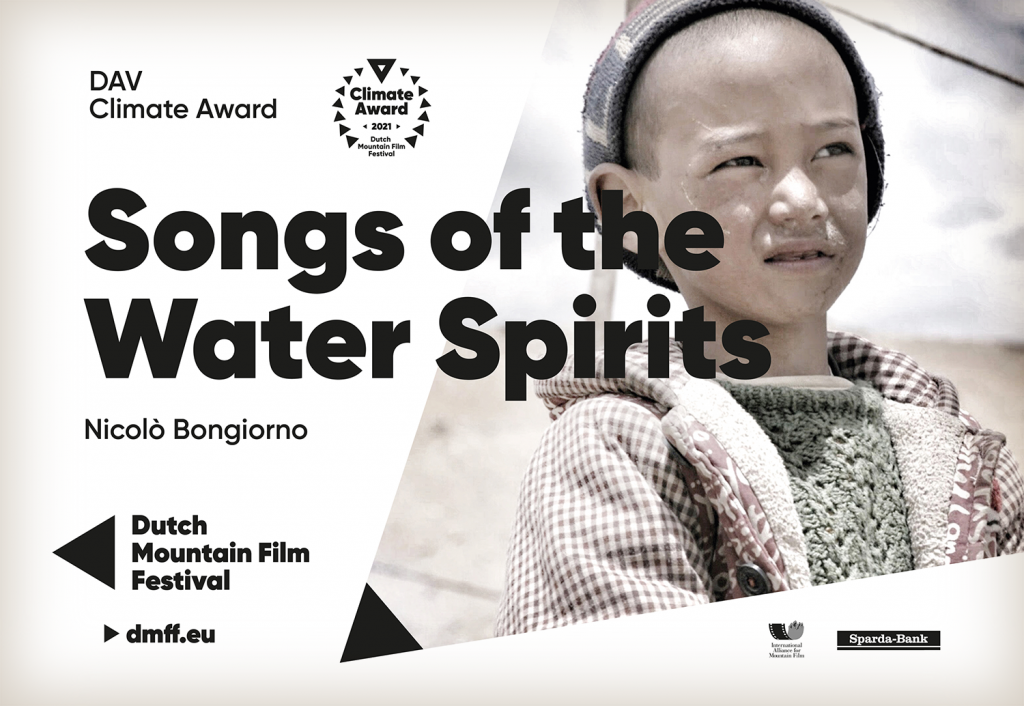 A stream of empty water bottles, a glacier of plastic – it is strong and saddening proof of what is happening on the roof of the world, in Ladakh, a Himalayan province that does not feature in everyday news, but nevertheless shows us the peril of modernization, globalization and tourism, eroding the age-old nature and culture of this beautiful and little-known part of the world. Visual poetry and the symbolism of water are coherently connected with specific information on this special place. This powerful documentary is different from many other films documenting climate change and cultural levelling in the high mountains, because it tells all these stories at once. The disappearing of the Bhoti-languages that existed for 1300 years, the appearance of rich tourists who drive their 4×4-cars and motor-cycles through this vulnerable landscape, the difficulties of holding on to the old Buddhist way of life. To hold on to the ibis, and to faith, like so many things endangered by money and power. The story is told by four strong individuals, from the young lawyer who fights against devastating tourism, to the older scientist who tries to save old languages before they die. Film is a strong medium – the invasion of Indian tourism in Ladakh started with a movie, ‘Three Idiots’, which was shot along the rugged rivers of the Tibetan Plateau, and now the city of Leh is building more and more hotels, spreading itself along the hills, struggling to find enough fresh water in this high-altitude desert by constructing ice stupas. So let’s hope that this documentary is as powerful in exactly the other direction.De DAV Climate Award is sponsored by Sparda Bank. 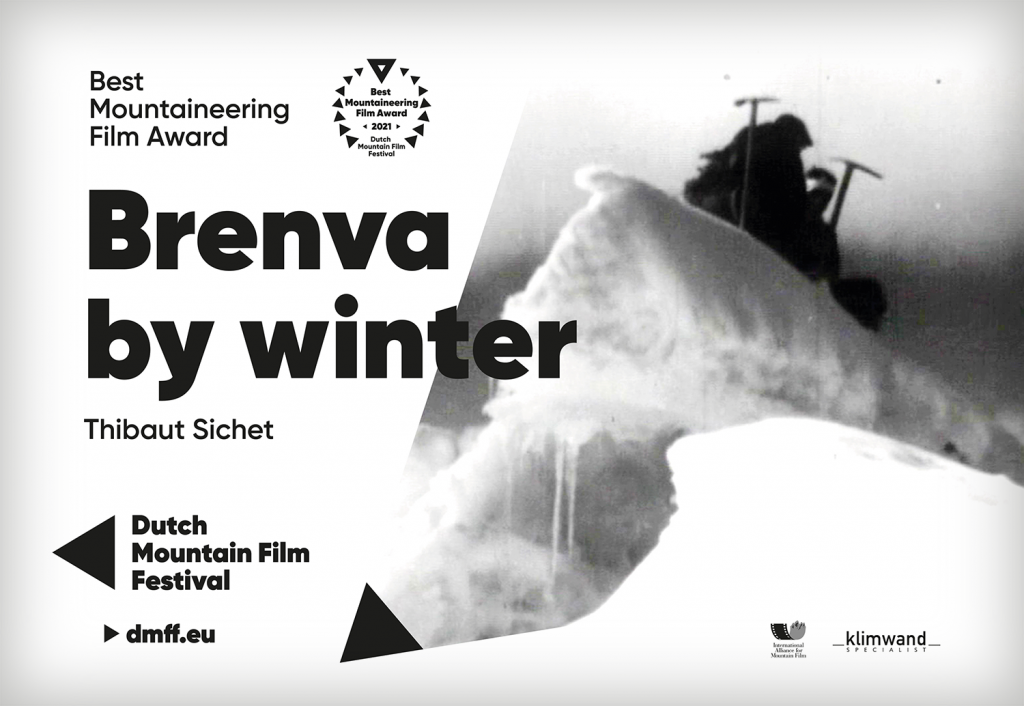 Nowadays, rescue missions in the mountains are nothing out of the ordinary. Partly thanks to mobile and satellite phones, a simple push of a button is enough to alert the emergency services. During the season, rescue missions to pull climbers off steep Alpine faces like the Matterhorn or Grandes Jorasses have become almost the norm. Even in the Himalayas, more and more helicopter rescues are being carried out, often at high elevation.

So it is hard to imagine that “just” 63 years ago, mountain rescues amounted to perilous undertakings which were few and far between. And absolutely unheard of in the winter! Those who embarked on such devil-may-care adventures really were on their own. Many mountaineers would set about the climb of their dreams without knowing whether they would ever come back. Many didn’t, becoming entombed in icy crevasses or freezing to death on exposed rock faces.

Brenva by winter tells the epic story of two young climbers who make an attempt to summit Mont Blanc in midwinter by way of the Brenva spur. Through a combination of inexperience and a rapid change in the weather, they were caught in a raging storm. For ten long days they fought for their lives at a height of over 4000 metres. Two hazardous rescue missions by helicopter failed to release them from their deathly snare.

Much has already been written about this tragedy and the rescue efforts. The incident was the subject of a film made in 2002 (Les naufragés du Mont Blanc,Denis Ducroz, 2002). However, Thibaut Sichet adopts a different approach for his documentary. With the aid of contemporary footage from the 1950s, he throws a new light on the story. Whilst many of the images are not specific to the tragedy, Sichet nevertheless succeeds in creating a mesmerising account of the unfolding disaster. This is less due to his efforts at putting a personal slant on the story (including a voice-over), but all the more because of the atmospheric and fascinating juxtaposition of historical film footage, supported by effective audio material. All in all, Thibaut Sichet has managed to put together an intimate cinematic document that leaves scope for the individual viewer to reflect on the narrative. From an aesthetic point of view this is an out-and-out mountaineering film, which singles itself out from other mainstream climbing and adventure productions