Andrew Davies and the magic of maps

Andrew Davies: the face behind Mapping the Mountains

In 1984, Andrew swapped the Pennine moors for the Euregion. Since an early age he has had a fascination for maps, the mountains and the Great Outdoors. Of course, mountains and their legends cast a powerful spell on us, but we can find rich pickings closer to home too.

Andrew, how did you develop a fascination for maps and the mountains?

My father worked in insurance in Manchester city centre and one day he came home with a framed photograph of the Matterhorn which for many years afterwards took pride of place above the mantelpiece. Growing up, I became engrossed by the Matterhorn and its legends, not least the daredevil deeds of Edward Whymper and the first ascent of this awe-inspiring mountain.

Despite my father’s fascination for a mountain in the Alps, my parents were not extreme outdoor types. But they had an immense love of the countryside and every summer would seek out places which were off the beaten track in Wales or Scotland. As a young boy, I was spellbound by the mountains and was always sad when it was time to go home. My mother called me a mountain goat. On top of that, I had (and still have) a keen spatial awareness: it’s a kind of sixth sense. When I stood on a summit, I would always try to identify the other peaks in the distance and imagine what lay beyond. Hardly surprising then that the first thing you grab to read a landscape is a map! For most people, the defining souvenir of a holiday is a photo album. For me it’s a map.

Since the death of my father in 2014, I’ve had that same picture of the Matterhorn on my living room wall in Heerlen.

Have you ever made an attempt to make a map yourself? After all, they say the hills of Limburg are where the mountains begin.

To be quite honest, no. Nevertheless, on adventures in the mountains or elsewhere, I’ve often kept a journal and drawn maps of my wanderings. For me, the best souvenir of an adventure away from home is a detailed topographic map. If I can’t get hold of one, which is the case in many countries, the holiday always feels a bit of a let-down.

As far as Limburg and the Euregion are concerned, my collection of 1:25,000 maps is indispensible.

How often do use a map nowadays? Let’s be honest, a digital navigation system makes things a lot easier nowadays.

Just like a strong cup of English tea first thing in the morning, maps are part of my life. I have them lying all around the house, often in the loo, for reference – you never know where you might be going. During ‘lockdown’, I spent a lot of the time roaming the highways and byways of South Limburg. After 37 years of living in Limburg I’ve got to know them like the back of my hands, but still, the country has lots of surprises in store. In such cases, a detailed map is extremely useful in discovering these hidden nooks and crannies.

GPS and maps are as different as chalk and cheese. A digital navigation system is a useful toy in getting from A to B, but as soon as you want to wander off route, they have no practical use whatsoever. That’s where a map comes into its own. Digital maps can be a useful tool on a tablet or phone too, but what could be better than spreading a map across the kitchen table and poring over the fine detail?

In 2019 you curated the first Mapping the Mountains exhibition in Heerlen. How did that come about?

Like many other good ideas, it was conceived over a couple of beers in the pub. I’d been a DMFF volunteer for quite a few years and I am known for having a thing about maps. Toon and Thijs [the festival directors] had been pestering for some time to organise an exhibition about mountain maps: it would, they argued, fit in exactly with the aims and ambitions of the film festival. After an evening at Café Pelt [in Heerlen] in November 2018 I finally caved in. The idea was quite daunting at first and I didn’t really have a clue where to start. Slowly but surely however, I drew up a plan and took up the challenge. Luckily I had quite a bit of input from contacts in the IAMF, and visited the national library of the CAI in Turin on several occasions. Their digitised catalogue of historic maps served as a sort of starting point for the whole set-up.

Last but not least, I had great support from other DMFF colleagues, as well as the collaboration of de Vondst, the Limburg centre for archaeology where the exhibition was first held.

It was an intense year, but from start to finish, it was never a dull moment and I was delighted with the final result.

The Mapping the Mountains was extended due to popular demand. Why is it that people are so interested in maps?

By no stretch of the imagination am I on my own: many people are fascinated by maps. They spur us on to adventure or serve as a reminder of a past exploits. Every visitor had his or her own reason for coming to the exhibition and it attracted people from many different walks of life. For example, local history enthusiasts, geography classes, former mining surveyors who could in some way identify closely with the material on display.

Of course, the Mapping the Mountains exhibition told its own specific story about the mountains, but if I have to be honest, the maps are not just manifestations of cartographic development, they are works of art in their own right.

Is Mapping the Mountains being followed up? Or do you have any other plans?

The Mapping the Mountains project has certainly not run its course yet!

Other (mountain film) festivals abroad have also been showing an interest. That was always the intention anyway. There are plans to take the exhibition to Banff in Canada in 2022 and of course, additional material will have to be prepared to ‘localise’ the exhibition, in this case, with maps and stories on the Canadian Rockies, of which there are so many.

What’s more, I’m writing a book. It will be much wider in scope than the exhibition, both historically and geographically, with a focus on the people and places that put mountains – quite literally – on the map. There are so many interesting map stories to tell, so I’m currently researching archive material and other sources, for example, in alpine club libraries around Europe. What more could I want out of life?

Final question: what can we still discover in our own region?

That’s a tricky question! I recently wrote a blog about the joys of ‘urban walking’ as part of the lockdown and what you can find on your own doorstep.

I don’t have one particular favourite spot in and around Heerlen, but when there are clear blue skies, the view from Vrouwenheide is especially grand. It’s as if the whole of the Euregion is at your feet.

And in Aachen of course, there is a grand view from the top of the Lousberg.

As it happens, I put together an English-language ‘insider tips’ guide for visitors from outside the region on the DMFF website a couple of years ago.

But that’s really just the tip of the iceberg! 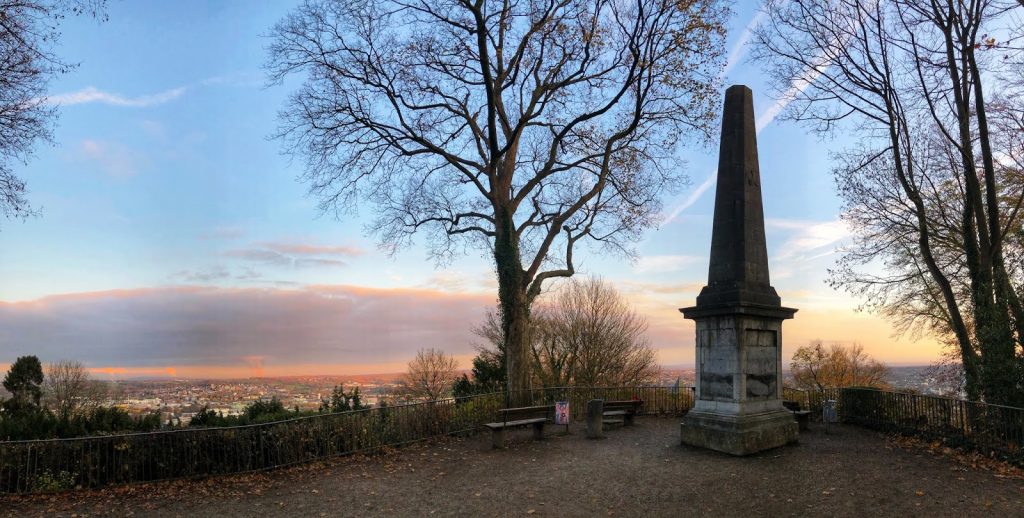 Monument to cartographer Jean-Joseph Tranchot on the Lousberg in Aachen